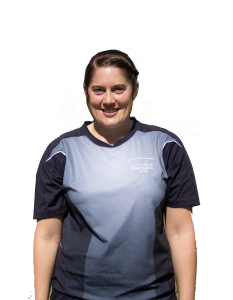 PHFC was clearly outclassed by the fast running and accurately passing Cougars, yet you can’t say the game was a write off! It was a physical game, but also a clean game in which both teams contested the ball, enjoyed the thrill of the game and never gave up. Testimony to PHFC’s ‘never say die’ attitude and the team’s ability to play as a team was that 12 of the 13 girls who took the field received votes in the players’ player 3, 2, 1’s after the game. More on the results of that vote later in this game report.
A key feature of the game was the sound of strong tackles and outright collision. It was common to hear “thud” followed by seeing rolling players when two girls ran in, and feet connected with the opposite sides of the ball thereby arresting all momentum and sending both players sprawling. At least the vast majority of these clashes were foot to ball and the painful clashes of boots to shins, feet or knees were avoided. Tash took a heavy tackle in the first half and could be seen limping slightly after each new clash, yet she valiantly played through the pain and stopped Cougar play after Cougar play! With her speed and ability to get a foot in just the right spot Tash has cemented her spot in the hearts of PHFC players, spectators and coaches alike.
When it wasn’t a “thud” of feet on ball, it was a “whoosh” of air leaving two players’ bodies when they where lined up in their chase resulting in a full body “bounce off”. Greta was in a few of those, as were others. Notably, one Cougar ran into Skye and bounced off hard clutching her rib cage. Skye was pretty chuffed with her fearless ability to stand in the path and take it!
Speaking of getting in the path, another stand-out feature of the game was the ball control of the midfield – not just with feet, but with numerous “body balls”. All those drills at training to learn how to head the ball, chest the ball, trap on the stomach or on the inside of the thigh are paying off. Kath was on fire taking many body balls – even standing in the path of an attempted through ball – her abdominal muscles must be like steel! Lane demonstrated more confidence in the second half and joined in the “first to the ball, take it on the body, turn it away from the opposition and pass to a forward” plan of attack. After the game a team-mate was heard commenting, “Lane has a good boot on her”.
The body balls weren’t just limited to the mid-field, the back line got into it as well. Stacey took a ball to the jaw that left her seeing stars, and Tash…well Tash clashed just about every part of her body on the ball or opposition players during the game. Brave play! Zarna had to face numerous 1:1 challenges and started coming out of the box more as the game progressed, sliding in to make herself her big and stopping quite a few. She will have a few bruises after the game.
Parkes Hotel’s passing skills are improving too. Esther was pin point accurate in the mid-field: directing and controlling play – doing numerous turns and always in just the right spot. She took out “coach’s player of the match”. Deano did one awesome heal pass – just like she practised on Thursday night with the roll behind in the front line to create a shot on goal. And Haylz’ “fancy feet” were on display with numerous side steps and spins. Of course, so was the reason why she is nick named “skittles”. She’d go in all fancy feet, dance around the main threat, and then just as she was passing, seem to trip up over an innocuous little foot and “down she’d go”.
There was one heart stopping and sad “man down” moment when Esther, having just stolen the ball from a Cougar, turned to distribute it and her knee gave out and she crumpled. Esther was carried off the field and later went to hospital to get checked out – The club is hoping it will be a short recovery of 3 weeks and not a long road to recovery.
Even though Parkes Hotel didn’t find the back of the net they did create chances! Notable moments included Ains’ dash down the right side of the field to find a cross. She made a solid hit and sent a hard, high ball toward the opposite corner of the goal, but the Cougar goalie intercepted. Well kicked, Ains! The Chester sisters were “mind-linked” sending a few 1-2’s or trap and pass backs to regather and created chances. And of course, the afore mentioned heal pass from Deano to Hayz created a chance too.
Another feature of the game was the sprints back to mark the speedy Cougars. Assistant Coach Dan Gordon said “we got better at in the second half, but that we still got burned in the box. We need to get better at trusting our players and sticking tight to mark opposition players around the box”. None-the-less, all 9 of the Cougar goals were what Dan called “good goals” – Parkes Hotel didn’t concede any soft goals.
The results of players’ player: Kath came in second and Haylz took out the vote. Well done to Esther, Haylz and Kath! It was a good game even if though the score line was a blow out.